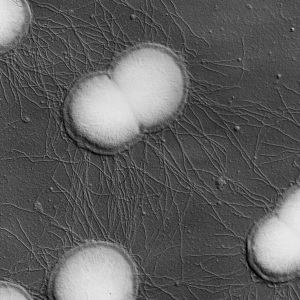 Neisseria gonorrhoeae, the bacteria species that causes gonorrhea, is pictured here in a photograph taken with a scanning electron microscope. Projecting from the organism’s surface are many pili, powerful appendages that enable the bacteria to adhere to human cells. Image from the National Institute of Biomedical Imaging and Bioengineering.

April is STD Awareness Month, but this blog has sought to increase your awareness of sexually transmitted infections on a monthly basis. So far in 2011 we’ve pointed the spotlight at human papillomavirus, barrier methods, and herpes. This month’s installment will focus on gonorrhea, colloquially known as “the clap,” a common sexually transmitted infection caused by sneaky bacteria called Neisseria gonorrhoeae. It is spread by vaginal, anal, and oral sex, and can infect certain cells in the throat, mouth, rectum, urethra, or cervix. It can also be transmitted manually to infect the eye. If you are sexually active, you can reduce risk of transmission by consistently and correctly using latex barriers such as condoms and dental dams.

Four out of five females infected with gonorrhea do not experience symptoms – males, however, usually do, but they can be mild and therefore easy to overlook. Symptoms can appear within a month, and might include painful or frequent urination, vaginal or penile discharge, painful bowel movements, itching, or sore throat. Additionally, females can experience abdominal pain, fever, irregular menstruation, or bleeding between periods. In pregnant women, untreated gonorrhea infections can lead to complications such as premature labor or stillbirth. The infection can also be passed from mother to infant during delivery.  END_OF_DOCUMENT_TOKEN_TO_BE_REPLACED