Posted on November 8, 2011 by Anna | Comments Off on STI Awareness: Cytomegalovirus and Molluscum Contagiosum

Most sexually transmitted infections (STIs) are caused by microorganisms – lifeforms that are too small to be seen without a microscope. Many STIs, however, are caused by viruses, which technically aren’t even alive. Rather, viruses are pieces of genetic information that are stored in protein capsules. When these capsules come into contact with a host cell, the genetic information is able to enter the cell and hijack its machinery so that the host cell manufactures copies of the virus, as well as potentially harmful viral proteins. Many well-known STIs, such as herpes and HIV/AIDS, are caused by viruses, but this month we will focus on two lesser-known viral STIs, cytomegalovirus and molluscum contagiosum. Your local Planned Parenthood health center, as well as other clinics, health departments, and private health-care providers, can help you get a diagnosis and treatment for these STIs.

The bad news is that most people are infected with cytomegalovirus (CMV) at some point in their lives. About 80 percent of the U.S. population is estimated to be carriers, about 4 in 10 Americans are infected with CMV before puberty (usually through contact with saliva), and adults can be reinfected through sexual activity. The good news is that among healthy adults, a CMV infection usually does not have any symptoms, though if they do they could seem like a mild case of mono. Being reinfected with the virus later in life also carries with it only a small risk for symptoms in healthy adults.

And back to the bad news: While an infection with cytomegalovirus usually does not have symptoms, if someone is infected while pregnant it can harm the fetus. About 1 in 100 U.S. babies is infected with CMV, but usually doesn’t show symptoms. Every year in the United States, around 5,500 babies are born with symptomatic cytomegalic inclusion disease (CID). Symptoms of CID vary, but the most severe include mental retardation and hearing loss. If the mother was already infected before conception, there is a 2 percent chance the virus will be transmitted to the fetus; however, if the infection occurs during pregnancy, this risk jumps into the 40 to 50 percent range. END_OF_DOCUMENT_TOKEN_TO_BE_REPLACED

Comments Off on STI Awareness: Cytomegalovirus and Molluscum Contagiosum 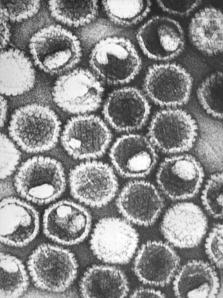 Last year, in my Anatomy & Physiology class, the subject of herpes came up, which launched a few people into mini-tirades laced with judgmental language, describing it as “disgusting” and “gross.” My classmates might have been more sensitive, as statistically speaking, there were probably several people in that very room who were living with herpes. Given that most of my fellow students were pursuing careers in the health-care field, it was especially disheartening. Yet despite being relatively widespread, herpes is often stigmatized and misunderstood.

Herpes is caused by herpes simplex virus (HSV), which comes in two strains: HSV-1 and HSV-2. HSV-1 is most often associated with oral herpes, while HSV-2 is most often associated with genital herpes, though by no means is this association exclusive. For example, HSV-1 can cause genital herpes when the site of infection is the genitals. It is estimated that only 10 to 15 percent of those with herpes exhibit symptoms, and that millions of people unknowingly carry the virus. After infection, the virus enters a latent state in nerve cells, where it will remain for the rest of the host’s life – the same is true for other viruses in the Herpesviridae family, such as the virus that causes chickenpox.

Oral herpes is incredibly common – about 90 percent of U.S. adults have been infected with HSV-1, and most of them caught it as infants or children through nonsexual transmission. HSV causing oral herpes remains latent in the trigeminal nerve ganglia in the face. Cold sores, which appear on the outer margin of the lips, appear when the virus has been activated and it moves along the pathway of nerves from the ganglia to the surface of the skin. They can be triggered by sunburn, stress, or even menstruation.