“When the marvel of the spring came to the desert, you saw the cactus and the flowering, saw the brown floor change to delicate pale yellow, stood in awe of nature daring to live without water. You were reminded of the futility of wearing out your life merely providing food and raiment. Like the challenge of death, which so many of the people there were gallantly facing, the desert itself was a challenge.” – Margaret Sanger on Tucson, in her autobiography 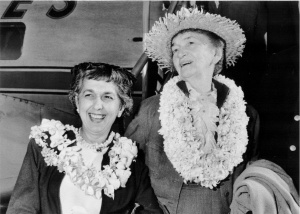 Margaret Sanger in 1959, with friend Grace Sternberg, returning to the United States after a trip to New Delhi, Sanger's final overseas trip.

Margaret Sanger moved to Tucson in the 1930s and soon thereafter decided to live here full time, believing that the warm climate was conducive to good health. During Sanger’s years in Tucson, she latched onto any health fad or other technique she thought might improve her health. She exercised and experimented with various diets, including fasting on juice; eating a combination of yogurt, wheat germ, and honey; taking vitamin E supplements; and eating papayas (which she had shipped from Hawaii) for their alleged “restorative substances.”

In 1949, however, Sanger suffered a heart attack, and her son Stuart, a doctor, injected her with Demerol, a recently introduced painkiller not considered addictive at the time. The next year she had a second heart attack, resulting in another long convalescence at the hospital. Her addiction to Demerol intensified; she got Stuart to write prescriptions for her, and would sometimes falsely claim that bottles of the drug had fallen and shattered, which would require further prescriptions to be written. If a nurse refused her demand for Demerol, Sanger would inject it herself. Her son tried to wean her from the drug by collecting empty bottles and filling them with a diluted concentration of the drug, slowly increasing the proportion of water to Demerol until the solution was pure water. This was effective for a while, but eventually Sanger realized she had been duped and endeavored to get her hands back on the drug. She went through other doctors, firing them when they would decrease her dosage, and eventually took to self-administering injections of pure water every 30 minutes. Her addiction, it seemed, was both to the drug itself and the psychological comforts of the injection.  END_OF_DOCUMENT_TOKEN_TO_BE_REPLACED

Posted on October 1, 2010 by Anna | Comments Off on Margaret Sanger in Tucson: Still Going Headstrong 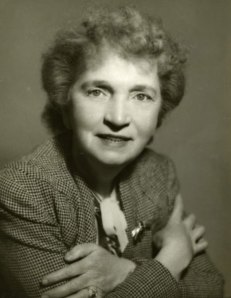 Throughout her quasi-retirement in Tucson, Margaret Sanger was still committed to the cause that propelled her into the national spotlight in the first place. In Tucson, she arranged to debate the Bishop of Arizona to address “the morality of birth control” – they spoke on different nights, however, since neither wanted to be on stage with the other.

William Mathews, editor of the Arizona Star, wrote: “Who do these women think they are to take on the Bishop of Arizona?” Apparently it was still the prevailing sentiment that a woman’s place was in the home, and despite all the socializing and entertaining Sanger did in her own life, she wasn’t shy about returning to the public sphere.

She wasn’t shy about defying authority either. One example of this facet of her personality was related by one of her biographers. Attempting to cross into the United States from Nogales, Mexico, the border inspector informed Sanger that she could not enter the country without having the required vaccination. Thinking this requirement unnecessary, she tried to refuse, but the inspector was insistent. She relented, and he administered the injection, but immediately after crossing the border, in full sight of the inspector, she sucked the vaccine from the injection site, grinning at him mischievously.  END_OF_DOCUMENT_TOKEN_TO_BE_REPLACED

Comments Off on Margaret Sanger in Tucson: Still Going Headstrong