An Inspiring Legacy of Giving

Posted on June 6, 2011 by Brain Tumor Warrior | Comments Off on An Inspiring Legacy of Giving 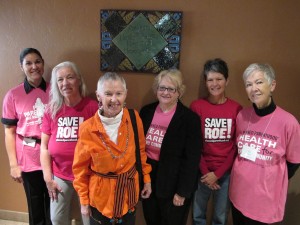 Planned Parenthood Arizona recently dedicated the lobby of their administrative headquarters in Tucson in honor of two of their longtime supporters, Dr. Hester and Raymond Fassel. I was lucky enough to meet up with Hester to ask her about her relationship with Planned Parenthood. And I have to say, Hester Fassel is one inspiring lady!

Mrs. Fassel was born in a suburb of Chicago, but she grew up in Northern Indiana. Hester became a Professor of Zoology at Iowa State University, and her husband Ray was a publisher at ISU Press. The two of them relocated to Tucson in 1987, after abandoning their initial plan to retire in Spain. They picked Tucson because it had a similar geography and climate to Spain, and the transition from Iowa to Arizona was fairly seamless.

Dr. Fassel says that her role as a professor also had a lot of influence on her decision to support Planned Parenthood. Hester explains that “I taught this lecture course in human reproduction, anatomy, and physiology. And the students knew they could contact me about anything.”

“The journalists took out after the Pill,” says Hester. “They said, ‘If you take the contraceptive pill, you’re going to die.’ And the kids would come to me, and say, ‘Hester, is it safe?’ So I included plenty of information in my lectures. I tried to push the good of the Pill. I would ask the kids to bring in those newspaper clippings, and then I would comment on them in my lectures. I tried to give them the facts.”

Ironically enough, I met with Hester on Friday, April 8, 2011, the day that members of Congress were on the verge of a federal government shutdown over the issue of federal funding for family planning services. When I asked Hester about the significance of that, she said that it reaffirmed for her the importance of Planned Parenthood’s work.

“I don’t know how you do it,” she says. “Planned Parenthood does it, and you do the best job that anybody can do. And we need you.”

In spite of the harsh political climate we live in, Hester remains “optimistic” that Roe v. Wade is here to stay, and that supporting Planned Parenthood can make a difference for women’s health. It’s a tough job, but we all have to step up to the plate, and Hester says, “Carry on.”